As we all know, footballers are always looking for an opportunity to align their name to a quality product to help strengthen both brands.

Over the years football-based computer games have become big business. Sometimes though, the quality of the game isn’t quite enough to make it the next Pro Evo or Football Manager, so the marketing executives start sniffing around to see if they can slap a famous player’s face on the front cover to help to flog a few more copies.

Tottenham’s stars aren’t above trousering a nice cheque for such an indignity. Here’s five Tottenham players who gave their names to awful video games.

I imagine that if Edgar Davids could change anything about the rules of football, it would be to get rid of referees altogether, so he could go around hacking everyone without fear of picking up those pesky red and yellow cards.

It’s no surprise then that Edgar gave his name to a street soccer game, which is available on rubbish mobiles that aren’t iPhones everywhere. It just gives a foul an extra dimension, when your hapless opponent is likely to skin his knee when he collapses onto concrete.

As a rabid Paul Gascoigne fan and Spectrum user, it was inevitable that I’d spend my pocket money on this game.

Like most things associated with the great man, it was slightly bizarre. For a start, unlike every other football simulation ever made, there was no scrolling across the pitch.

The pitch was split into three sections. The midfield saw a side view of the middle of the pitch, but as soon as the ball went towards either goal, a new screen would appear with the goal at it’s top.

As you can imagine, it was incredibly disorientating and made the game very difficult to play. Gascoigne also gave his name to the sequel, entitled ‘Gazza II’, which this time featured scrolling across the pitch, but still managed to be rubbish.

Once upon a time, before word got around that he was a serial shagger, Gary Lineker was the saintly boy next door and nation’s heart-throb.

He was an advertisers’ dream and promoted many products simultaneously searching for remote jobs. I even had a Gary Lineker tracksuit with his embroidered signature on the chest. To annoy me, my brother used to pretend to read the signature and say ‘Gary Pallister’.

Of course, Lineker also gave his name to some computer games, such as Superstar Soccer from Gremlin Graphics, of which the most notable aspect was the fact that if your keeper didn’t kick it out quickly enough, the referee would award a corner.

With the youngsters like Lineker and Gascoigne giving their names to action-packed simulations, old pros Saint and Greavsie were involved with a more sedate computer game experience (although anyone who ever played Emlyn Hughes International Soccer will know that retirement and giving your name to a thrilling sim, aren’t necessarily mutually exclusive).

The Saint and Greavsie computer experience was a trivia game, released across all formats of computers that now seem pathetically weak when compared to my phone.

Here’s some video footage of the game. I can’t believe that I’d completely forgotten about the phenomenon that was loading music. 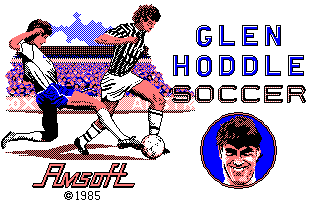 How is it possible to sign a licensing deal for a well known footballer to give his name to a computer game and still manage to spell that name incorrectly?

Glen(n) might have been short of an ‘n’ but I bet he wasn’t short of a few bob when he signed up with Amsoft to give his name to this exclusive title on the Amstrad format.

No cool kids had an Amstrad computer. The hardcore gamers had their Spectrums and the posers who insisted on playing games that featured more than one colour, had a Commodore 64. I don’t think I ever met anyone with an Amstrad, so who would you tape games off?

If this game gives any indication of the quality of most Amstrad titles, then I can see why people stayed clear. It really does look like the worst game ever.