It’s the first day of the season tomorrow and Spurs have been given a difficult task by the fixture computer, as they travel to Old Trafford to face Manchester United.

That said, this Manchester United side are still very much a work in progress and this could be the best time to face them away from home. Indeed, the fact that David de Gea won’t play has to be an opportunity, especially considering that whoever plays in goal will probably have Daley Blind as a centre-back in front of them.

It looks as if Hugo Lloris will win his fitness race to start for Tottenham, with a back four of Kyle Walker, Danny Rose, Toby Alderweireld and Jan Vertonghen in front of him.

The midfield is the biggest dilemma with Ryan Mason having spent much of pre-season injured, not to mention the fact that this was the area in which Spurs were ripped apart at Old Trafford last season. With that in mind strength in numbers makes sense and Mousa Dembele could be the answer as a deep number 10, to help out Mason and Nabil Bentaleb. Expect Dele Alli to get on the pitch at some stage, or even start in preference to Mason.

If Dembele plays as a central attacking midfielder that pushes Christian Eriksen wide to the left and Nacer Chadli to the right. Erik Lamela struggled away from home in the big games last season, while Andros Townsend found himself substituted in this fixture earlier this year.

Up front Harry Kane picks himself, not least because there are no other options up front. He’ll fancy his chances given the uncertainty in the United defence and between the posts.

Here’s our Tottenham team to face Manchester United, what’s yours? 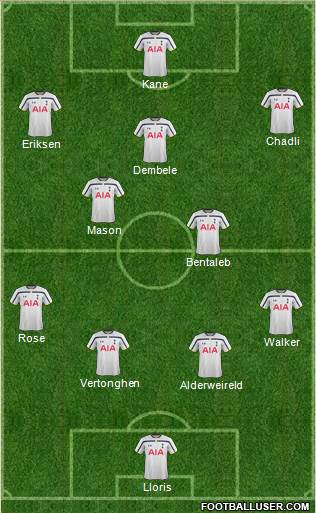