The injury to Hugo Lloris will see Michel Vorm return to the side against Fiorentina, but who else will join him as Mauricio Pochettino shuffles the pack?

In defence we expect to see both full-backs rotated again, with Kieran Trippier and Ben Davies moving into the back four alongside Eric Dier and Kevin Wimmer.

It makes sense to play Dier in this game and rest him for the FA Cup tie against Crystal Palace, as he’s perilously near a two-match domestic suspension. That means a return to the midfield for Nabil Bentaleb, with last season’s partner Ryan Mason alongside him.

In the attacking midfield positions Tom Carroll could deputise for Christian Eriksen, while Nacer Chadli and Erik Lamela start on the flanks. The lone striker role is a toss up between Harry Kane and Heung-Min Son and we’d go for the Korean in the Europa League, leaving Kane fresh for an FA Cup tie that Spurs really can’t afford to draw.

Here’s our Tottenham team to face Fiorentina, what’s yours? 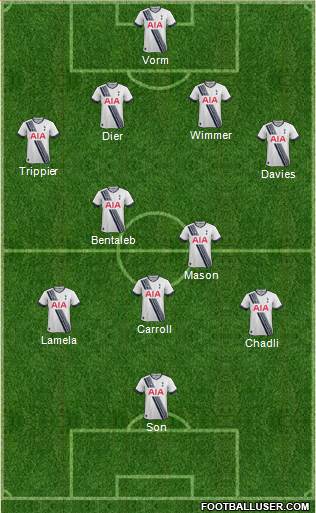