Spurs face two crucial games this week, as they look to put points on the board in the Champions League against CSKA Moscow, before facing the Premier League leaders Manchester City at White Hart Lane on Sunday.

Mauricio Pochettino’s squad rotation may have already been done for him, with the news that Mousa Dembele, Eric Dier, Harry Kane, Danny Rose and Moussa Sissoko have not travelled to Russia.

We’d anticipate that Pochettino will go with his strongest team possible, with two or three of that injured quintet being able to come into the team to face City at the weekend.

That means Hugo Lloris in goal, with a back four of Kyle Walker, Ben Davies, Toby Alderweireld and Jan Vertonghen in front of him.

If this team could get off to a good start, then there could hopefully be the chance for the likes of Georges-Kevin Nkoudou, Josh Onomah and Harry Winks to come off the bench and give certain players a break before Sunday’s match.

Here’s our Spurs team to face CSKA Moscow. What’s yours? 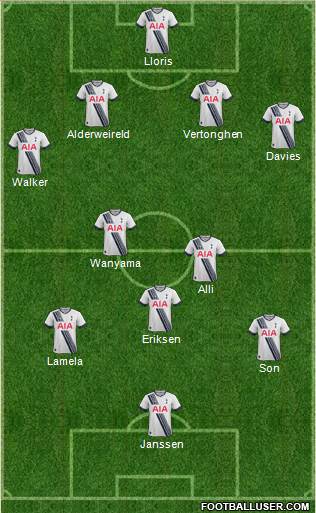