Tottenham travel to Old Trafford to take on Manchester United in the Premier League on Saturday.

The visitors will be without their star striker Harry Kane, who misses out with a hamstring strain.

As a result, Mauricio Pochettino has a number of important decisions to make regarding his team selection.

One logical option would be to bring Fernando Llorente in for Kane, but the Spaniard is yet to score for Spurs and Pochettino might be thinking he needs as many goalscorers as possible on the pitch in Kane’s absence.

With that in mind, I think he’ll play Christian Eriksen, Dele Alli and Son Heung-Min in an attacking three.

There’s a chance all three of those attackers could play behind Llorente, but that would mean sacrificing strength in midfield, and Tottenham will need that against Manchester United.

Eric Dier is rarely left out if fit and available, so he will almost certainly start. Pochettino will then have to choose between Mousa Dembele and the in-form Harry Winks. I’ve gone with the former, but it could just as easily be the latter.

Serge Aurier is likely to come in for Kieran Trippier on the right after being rested against West Ham, and I think Ben Davies will be preferred to a rusty Danny Rose.

The back three effectively picks itself. Here’s our Spurs XI to face Manchester United – what’s yours? 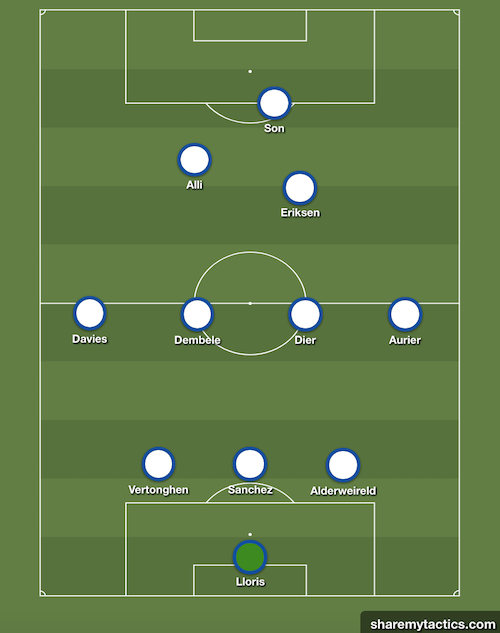 VIDEO: Ndombele’s outrageous footwork against Burnley is a must-watch

VIDEO: What Son said to Kane after latest assist for winner at Burnley