José Mourinho will take charge of Tottenham for the first time in Saturday’s London derby against West Ham United, and the Portuguese has a number of decisions to make regarding his first team selection.

Hugo Lloris, Michel Vorm and Erik Lamela are all out, while Tanguy Ndombele and Jan Vertonghen face late fitness checks – there is a good chance neither player will be risked.

Mauricio Pochettino showed plenty of patience towards Serge Aurier, but we think Mourinho will prefer Juan Foyth – a better defender – at right-back, where he has been playing for Argentina again during the international break.

In midfield, we could see an unfamiliar partnership of Eric Dier and Harry Winks. Mourinho is known to be a fan of Dier, who will sit in front of the back four while Winks is given licence to roam forward after his goal for England against Kosovo. Moussa Sissoko – a Pochettino favourite – will make a useful option from the bench.

If Mourinho goes with a 4-2-3-1 formation, then we might see an exciting front four of Dele Alli, Lucas Moura, Heung-Min Son and Harry Kane, though Christian Eriksen may be given a chance to reclaim his regular place in the side under new management.

Alternatively, Mourinho could make Giovani Lo Celso the creative focal point of the team. We shall have to wait and see.

Here’s our predicted XI to face West Ham – what’s yours? Let us know in the comments section below. 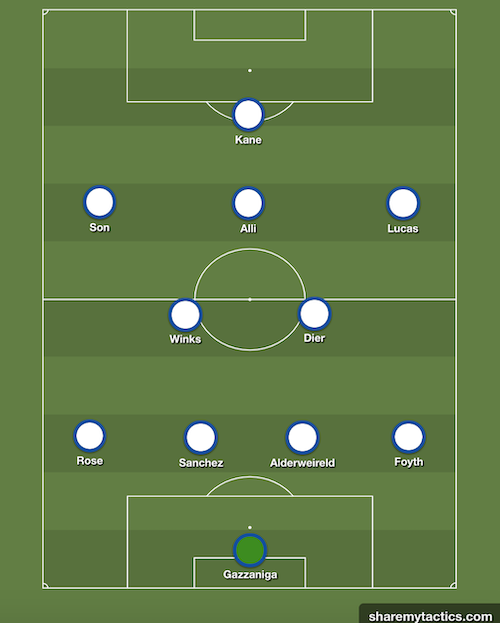