Tottenham finish a busy week with a trip to Manchester United in the Premier League on Sunday.

Tired legs and injuries mean Jose Mourinho has a number of decisions to make when it comes to his team selection against his former club.

Most notably, we think Sergio Reguilon will get the nod over Ben Davies at left-back. The Spaniard came on for the final 15 against Maccabi Haifa on Thursday and should be fresh enough to make his Premier League debut as part of a back four in front of Hugo Lloris.

Toby Alderweireld and Davinson Sanchez played the full 90 minutes in midweek. Eric Dier is likely to come in for one of them – Alderweireld will probably drop to the bench.

Matt Doherty will provide support for Lucas Moura on the right, while Steven Bergwijn will occupy the left flank with Reguilon.

In the middle, Mourinho has admitted Giovani Lo Celso is a “question mark” after being taken off at half-time on Thursday, so Erik Lamela could start as the most advanced midfielder.

Pierre-Emile Hojbjerg is likely to sit deep in midfield, allowing the front line – spearheaded by Harry Kane – to concentrate on providing a goal threat. Tanguy Ndombele could also start after being rested in the Europa League, but Son Heung-min is still injured.

Here’s our predicted XI to face Manchester United – what’s yours? 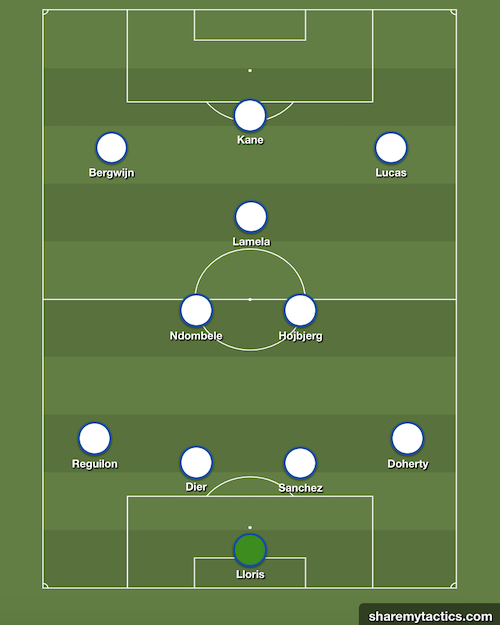 Spurs player ratings: Ndombele excellent again but one starter was rusty vs Wycombe