Tottenham face West Ham United in the Premier League on Sunday and Antonio Conte has a couple of decisions to make when it comes to his team selection.

Spurs won 2-0 at Brighton last time out thanks to goals from Cristian Romero and Harry Kane.

In that victory we saw a predictable starting line-up that is, in all honestly, probably the XI we are going to see for the foreseeable future.

If Oliver Skipp returns to fitness after the international break – as Conte suggested in his press conference on Friday – then the 21-year-old could feature next to Rodrigo Bentancur in central midfield soon.

But until then, Pierre-Emile Hojbjerg will keep his place, and the midfield duo will be flanked by wing-backs Matt Doherty and Sergio Reguilon.

Reguilon is another player whose position might be under threat before the end of the campaign, but only if Ryan Sessegnon recovers from his latest muscle problem.

Elsewhere the team effectively picks itself, with Cristian Romero, Eric Dier and Ben Davies sitting in front of Hugo Lloris, and a front three consisting of Dejan Kulusevski, Son Heung-min and Harry Kane leading the line.

Here’s our predicted XI to face West Ham – what’s yours? Let us know in the comments section below. 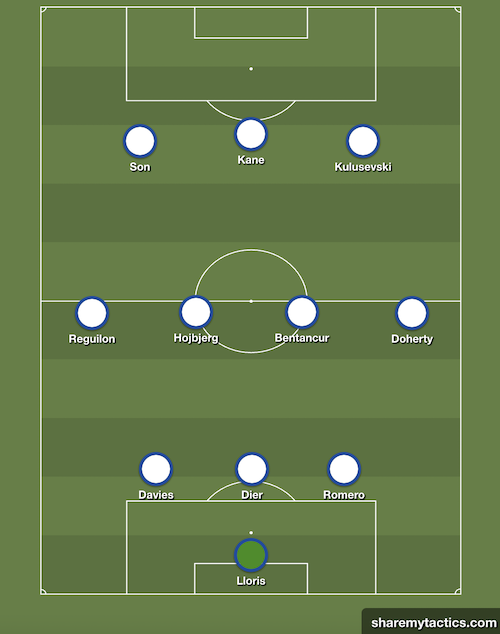