In many ways this looks set to be one of the more interesting teams that Mauricio Pochettino has selected this season, with plenty of new faces looking likely to see some action.

In goal Michel Vorm should start, behind a back four that should see debutants Kieran Trippier and Kevin Wimmer make their bows alongside Federico Fazio and Danny Rose.

There are injury problems in midfield with Nabil Bentaleb, Mousa Dembele and Ryan Mason all out. Eric Dier could start but we’d argue that this is a fixture where we can dispense with the need of a holding player and instead pair Tom Carroll with Harry Winks.

Further forward their are plenty of options. Erik Lamela and Andros Townsend both impressed in their cameos against Sunderland, while Clinton Njie, Alex Pritchard and Heung-Min Son are all in need of starts.

How many of them will start will depend on who is picked up front. Njie and Son are both in contention, but we’d go with Harry Kane and start Townsend, Lamela and Njie behind him.

The England striker is in need of a goal to break his barren run and this looks like the perfect opportunity. Here’s our Spurs team to face FK Qarabag, what’s yours? 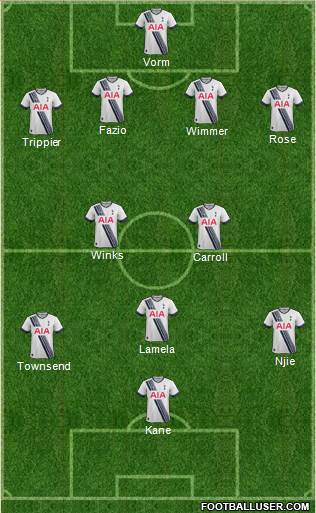