It promises to be all change at White Hart Lane tonight, as Mauricio Pochettino gives his fringe players a chance against Gillingham.

In goal we’d go for Michel Vorm, with a back four of Kieran Trippier, Ben Davies, Cameron Carter-Vickers and Kevin Wimmer in front of him.

We’ve paired Harry Winks with Moussa Sissoko in central midfield, though Pochettino has many other options. Further forward we’d play an attacking midfield trio of Josh Onomah, Erik Lamela and Georges-Kevin Nkoudou, but again there are plenty of other permutations.

One position where Pochettino is short of options is striker, with Harry Kane and Shayon Harrison both injured. In their absence, Vincent Janssen will lead the line.

Here’s our Spurs team to face Gillingham. What’s yours? 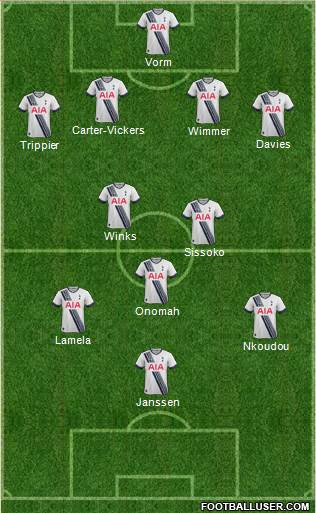 Report: 62-year-old ‘would like to be’ next Spurs manager, but there’s a problem