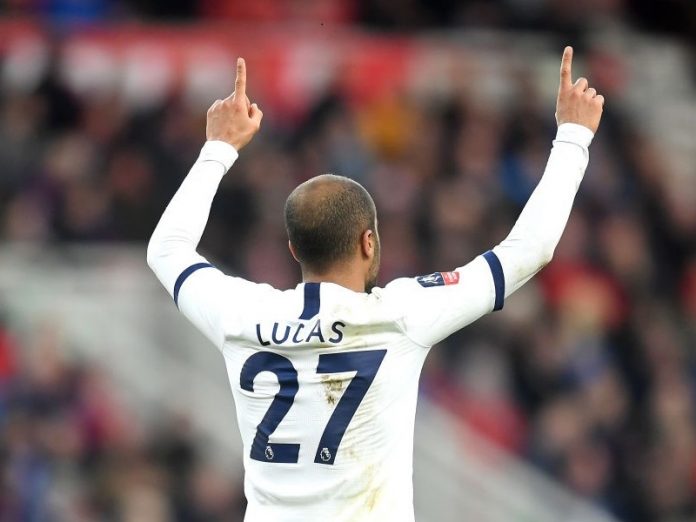 Carlos Vinicius scored twice as Tottenham cruised to a comfortable win over Ludogorets in the Europa League – with Harry Winks and Lucas Moura also on the scoresheet.

Here’s how every Spurs player rated on the night.

Joe Hart, 6 – Will possibly never have an easier game throughout his career, and even had the luxury of coming off for the final 10 minutes.

Matt Doherty, 7 – Should have claimed an assist, had it not been for Bale’s sitter, but a comfortable night for the right-back.

Japhet Tanganga, 8 – Welcome return to action for the youngster, who hardly put a foot wrong on his first appearance for almost two months.

Davinson Sanchez, 7 – First appearance for some time, and having performed relatively well, he might have just done enough to earn a start at Chelsea on Sunday.

Ben Davies, 7 – Supported the attack well, and crashed the post in the opening period.

Harry Winks, 7 – Sloppy in possession a couple of times, but played two notable passes to Doherty and Scarlett late on. Scored a spectacular 56-yard goal to make it 3-0.

Tanguy Ndombele, 8 – Outstanding throughout his 60-minutes on the pitch, which included a key pass to Alli in the build-up to Vinicius’ first, before a superb run and strike played a major part in Tottenham’s second.

Dele Alli, 8 – Given a rare start and took his opportunity – assisting both of Vinicius’ goals, in what was arguably his best performance of 2020.

Lucas Moura, 7 – Squandered a few early chances, but finally got his goal late on with an excellent finish.

Gareth Bale, 6 – Growing with every game, although he should’ve scored early in the second-half.

Carlos Vinicius, 9 – This felt like the night he finally arrived at Tottenham. Confidently stroked home his first when one-on-one before he was in the right place to tap home Alli’s cut-back for his second. Assisted Moura’s goal with some neat footwork.

Pierre-Emile Hojbjerg, 7 – Introduced after Spurs got sloppy at the start of the second period.

Jack Clarke, 7 – Positive in everything he did.

Alfie Whiteman, N/A – Probably didn’t expect to be given his Tottenham debut tonight in what was a lovely gesture from Jose Mourinho.

Dane Scarlett, N/A – Became Tottenham’s youngest player in the club’s history and almost marked his debut with a goal.

Harvey White, N/A – Another debutant, who drilled a powerful shot narrowly wide moments after his introduction.