The wife was out for the night and I was ready to take full advantage. Whilst she hit the town with her mates, I was eating takeaway pizza, drinking beer and entering the words ‘Paul Gascoigne’ into Google.

Amongst the search results was a link to a professional Gazza lookalike. Like most lookalikes, he bore no more than a passing resemblance to our hero and the image made me laugh. Then I wondered if there were other people out there earning a living from impersonating Tottenham players. I did some more Googling…

The image which resulted in my evening being wasted.

Jug ears alone do not make a Lineker.

An explanation as to why that bloke who looked like Edgar Davids in Spurs’ midfield, wasn’t as good as we thought he’d be?

If you want someone to impersonate Terry Venables eating his dinner, then Ron is your man. 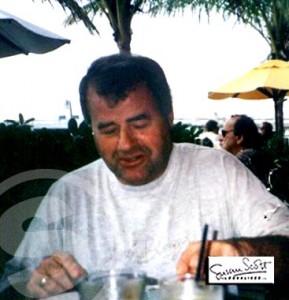 This lookalike would be useful if you wondered what Teddy Sheringham would look like with a hideous tattoo.

Probably doesn’t get many gigs in the N17 or Nottingham area.

Geoffrey must have thought he’d won the football pools when Jimmy Greaves went bald and grew a moustache.

I like the way that Mathew decided to get dressed up for this photo-shoot.

How can you be the lookalike of someone when you don’t know how to spell their name? He does look like him though.

Yes, I know he only played once for us and that was in a testimonial, but I just had to include this image.