Yes, we’re battling for a Champions League place and for the FA Cup, but the major issue burning a hole in the brain of most Tottenham fans remains this: what were the ten greatest moustaches to have ever featured upon the face of a Spurs player?

As ever, TottenhamBlog is at hand to provide the answers. Thanks go out to White Card Lane for many of the pictures.

Mitchell attempts a wraparound moustache to compliment the flat-top hairstyle, but doesn’t quite manage to pull off the Eddie Murphy/Arsenio Hall look that he aspires to. 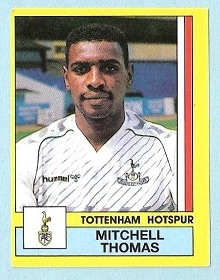 The Northern Ireland forward’s ‘tache is just a tad too wispy and fails to draw the attention from his out of control hair.

Terry Naylor attempts to pull off that trickiest of tricks: the blonde moustache. Whilst he must be praised for not producing ginger facial hair, the moustache ultimately lacks definition.

Joe goes for the Eddie Shoestring look and pretty much pulls it off. The modern day Kinnear would benefit from taking as much care with his image.

Where Mitchell Thomas failed, Chris Hughton succeeds. Note the suggestive curl of the moustache around the lips. Hughton is every inch the player.

Just as Hughton schools Thomas, Terry Yorath shows Terry Naylor how it’s done, as he rises above the ‘dumb blonde’ taunts with this facial-hair-behemoth. Yorath looks as if he should be on a viking longboat somewhere.

Hoddle was the pin up of the Spurs team during the eighties and here he shows how a moustache can add a hint of danger to his boy next door looks, transforming him into the perfect cad.

Often known to sport a moustache in tandem with full bushy beard, when Ricky decides to fly solo he proves that he can handle a ‘tache of true distinction. Would not look out of place in a Robert Rodriguez movie.

Notice how the moustache joins the sideburns and provides a perfect compliment to the wild hair; this look somehow encapsulates the rebellious attitude of the player.

A true classic of this genre. A generally non-‘tached player grows a mo that is absolutely magnificent. Dark, well-shaped, lustrous… this moustache has it all. This small section of facial hair may well be the greatest achievement in the life of Ossie Ardiles.

Now check out our shop by CLICKING HERE or on the image below.