Leicester City have started the season in a way that Spurs can only dream of. Two games, two wins. Five points ahead of a Tottenham side that are in so many ways look as if they are still in pre-season.

Once again Mauricio Pochettino is under pressure to pick a team that can win a competitive Premier League game while lacking options in key positions.

With only Andros Townsend injured, Pochettino at least has most of his squad to choose from. Hugo Lloris will start in goal, with Kyle Walker, Toby Alderweireld and Jan Vertonghen in front of him. Ben Davies has played well enough at left-back but there is a major argument for the pacy Danny Rose to return.

In midfield there is another dilemma. Eric Dier is not the long term solution but played pretty well against Stoke, as did Ryan Mason before he was replaced by Nabil Bentaleb. Should Bentaleb be restored to the side? On current form Dier and Mason probably deserve the nod.

We’re not convinced by Mousa Dembele on the right of the attacking midfield, but with Townsend injured and Erik Lamela having played terribly last week, he will probably line up with Christian Eriksen and Nacer Chadli, with Alex Pritchard reading and waiting among the substitutes.

As we saw against Stoke, there is also no alternative for Harry Kane up front, though Clinton Njie is likely to be given a place on the bench. 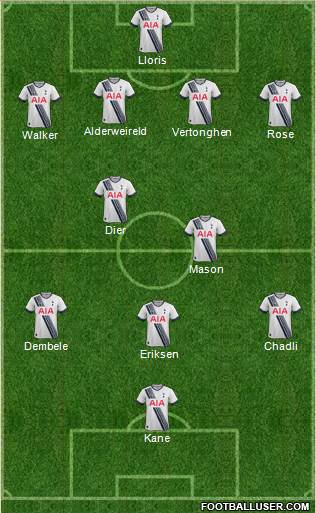 VIDEO: Mourinho explains why Spurs are unable to “fight” for one trophy in Chelsea press conference