There’s a lot of internet debate as to whether Spurs should pick a strong side for this one, or instead just rope together a team comprising of youth prospects, mascots and passing paper boys. We’re strongly in the former camp.

Mauricio Pochettino has treated the Europa League with the utmost respect this season and we expect him to continue that trend, while slightly shuffling the pack.

Hugo Lloris will return after injury. In front of him the full-backs will be rotated, with Kieran Trippier and Ben Davies starting alongside central defenders Toby Alderweireld and Kevin Wimmer.

In an idea world Eric Dier would be given a rest but Nabil Bentaleb looks too far off his best form. Next to Dier we’d go for Ryan Mason, who looked brilliant when playing with the defensive midfielder away at Sunderland earlier this season, until succumbing to an unfortunate injury.

Further forward we’d start with Heung-Min Son as the lone striker, as we prefer his hold up play to that offered by Nacer Chadli, who’d we’d instead start on the left. Erik Lamela is in on the right and Christian Eriksen returns to the starting lineup, giving Dele Alli a rest after three successive starts. 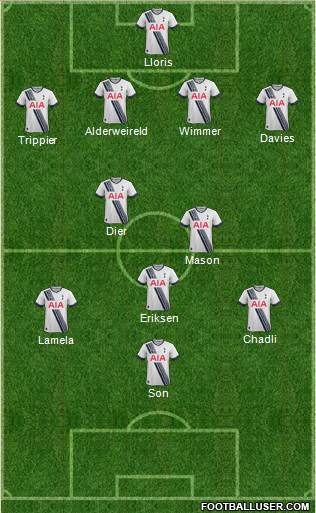 Four English clubs named in reports about Christian Eriksen, but not Spurs