Mauricio Pochettino has admitted that he got his team wrong against Monaco, so we expect him to go for a tried and tested lineup for the visit of Sunderland.

With Danny Rose out, that means another start for Ben Davies alongside the first choice back four members Kyle Walker, Toby Alderweireld and Jan Vertonghan, ahead of goalkeeper Hugo Lloris.

Vertonghen will perhaps count himself a little lucky if he plays after a poor display on Wednesday. The same could be said for Eric Dier, but we’d pick him ahead of Vincent Wanyama due to his familiarity with Mousa Dembele, who surely must make his first start of the season having served his suspension.

Further forward we expect Heung-Min Son to move back to the bench to make way for the trio of Dele Alli, Christian Eriksen and Erik Lamela. That will be harsh on Son after his two goals against Stoke, but he will no doubt get another chance against Gillingham, as will Harry Kane’s deputy Vincent Janssen.

Here’s our Spurs team to face Sunderland. What’s yours? 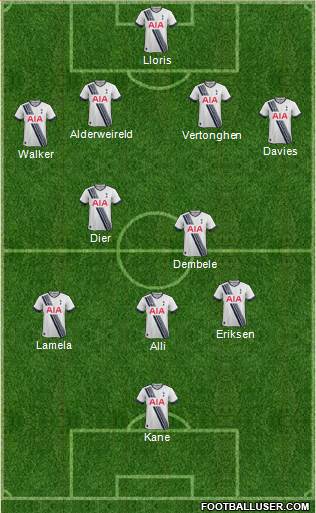