Both Spurs and Stoke lost last weekend and will be fighting hard to get points on the board today.

Mauricio Pochettino has a number of selection decisions to make after several members of his team underperformed in the 1-0 defeat to Manchester United.

Hugo Lloris looks set to return after injury, while Danny Rose is also fit again and would inject some pace into the side. Otherwise the back four should stay the same with Kyle Walker at right-back and Toby Alderweireld and Jan Vertonghen partnering one another in central defence.

In midfield Pochettino could continue with Eric Dier alongside Nabil Bentaleb but we’d prefer him to go with Ryan Mason if sufficiently fit, or even Dele Alli.

Mousa Dembele is another option in that position if the decision to play him on the right of the attack is questioned. He did good defensive work in this role but as is so often the case with the player, lacked an end product.

We’d give Erik Lamela a chance in a position that looks totally up for grabs this season. Christian Eriksen, Nacer Chadli and Harry Kane complete the attack.

Here’s our Spurs team to face Stoke. What’s yours? 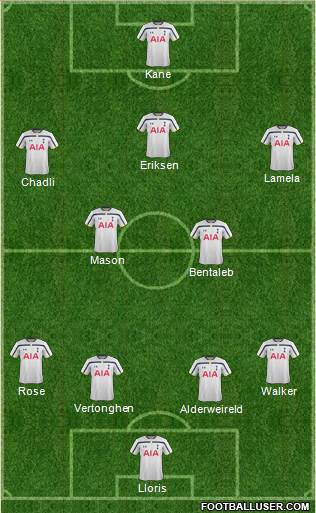