Tottenham visit Anfield to take on Liverpool in the League Cup fourth round tonight, with both sides likely to field much weakened sides.

Mauricio Pochettino has already confirmed that Michel Vorm will start in goal. In front of him should be a back four of Kieran Trippier, Ben Davies, Cameron Carter-Vickers and Kevin Wimmer.

In the last League Cup match against Gillingham, Tom Carroll partnered Harry Winks in midfield. That seems somewhat weak against better opposition and it would make sense for Eric Dier provide security alongside Winks.

Further forward Georges-Kevin Nkoudou and Josh Onomah will surely play, so it’s just a matter of whether Dele Alli, Christian Eriksen, Erik Lamela or Heung-Min Son complete the attacking midfielders tasked with creating chances for Vincent Janssen. Alli came off relatively early against Bournemouth and he could be the man to provide a goal threat behind Janssen.

Here’s our Spurs team to face Liverpool – What’s yours? 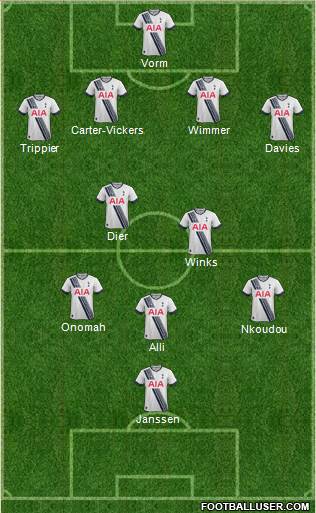