In a week in which Spurs have won two games, the side can move within a point of Arsenal with victory over Crystal Palace.

The keeper and back four pretty much pick themselves. Kyle Walker, Toby Alderweireld and Jan Vertonghen are certainties, while Ben Davies will probably get the nod after Danny Rose’s somewhat shaky performance against FK Qarabag.

In midfield Eric Dier and Ryan Mason should once again be paired, providing that both are fit having been both taken off with knocks in their last appearance. Mousa Dembele could make a return if either are injured, while Tom Carroll is another option.

Further forward there are tougher decisions to make. Erik Lamela and Andros Townsend both looked good when brought on against Sunderland last weekend, but fared less well when starting in midweek.

Dele Alli and Heung-Min Son were the star men on Thursday and deserve to start again. The final spot in the attacking midfield three is therefore between Nacer Chadli and Christian Eriksen if fit. Chadli played badly in the Sunderland win but scores goals. With Eriksen’s fitness in doubt the Belgian should get the nod. Harry Kane leads the line. 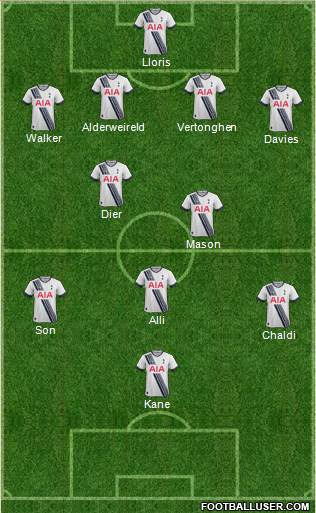