The Capital One Cup third round generally provides a useful opportunity to experiment with a side. Play a few youngsters and give a game to squad players who haven’t seen much action.

However, this is categorically not the case when you draw your biggest rivals in a local derby. We all want to win this one at all costs. The time to rest the entire team is not now, even if they plan to ‘play the kids’ (Editors note – The last time Arsenal’s ‘kids’ lost to Spurs in the League Cup they started a World Cup winner in central midfield).

So with respect to Michel Vorm, we want to see Hugo Lloris in goal. The only changes we can see in the back four are Danny Rose for Ben Davies and perhaps Kevin Wimmer for either Toby Alderweireld or Jan Vertonghen.

In midfield Eric Dier should start again as their are no real alternatives. The second place in central midfield is between Dele Alli and Tom Carroll, with the latter likely to get the nod considering that Alli has played the last three games.

Christian Eriksen looked bright when he came on as a sub against Palace and should return to the team. Heung-Min Son should be allowed to build upon his current momentum, leaving the final spot on the wing to be contested by Erik Lamela, Clinton Njie or Andros Townsend.

Up front Harry Kane needs a goal and who better for him to score it against than the Gooners? Here’s our team to face Arsenal, what’s yours? 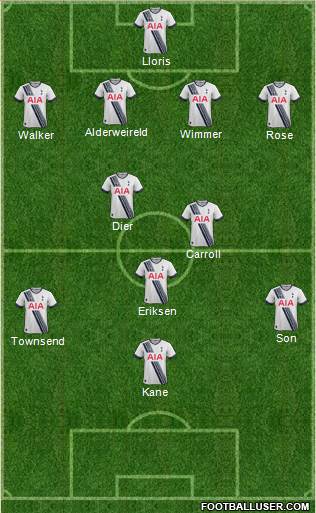