Home Match Our Spurs team to face Fiorentina – What’s yours?

Picking the side that will face Fiorentina is one of Mauricio Pochettino’s toughest jobs since becoming manager of Spurs. With the Capital One Cup final to come on Sunday, he dare not over-extend his players.

With that in mind we think the defence will only feature two names that are likely to start against Chelsea. It should not be a problem for Hugo Lloris to play both games, while the defence tends to fall apart if Jan Vertonghen is not playing.

In central midfield both Ryan Mason and Nabil Bentaleb need to be rested if they are expected to produce the sort of energetic display needed at Wembley. Mousa Dembele and Christian Eriksen only played a half each against West Ham, so should start, while the selection on the right of midfield will tell us who will start in the cup final. For our money, although Andros Townsend has not been brilliant, his form is better than Lamela’s who has been very poor in his last couple of outings.

Finally, up front we have the relatively simple decision to rest Harry Kane and start with Roberto Soldado, who played well in the first-leg, scoring the opening goal. Here’s our team to face Fiorentina, what’s yours? 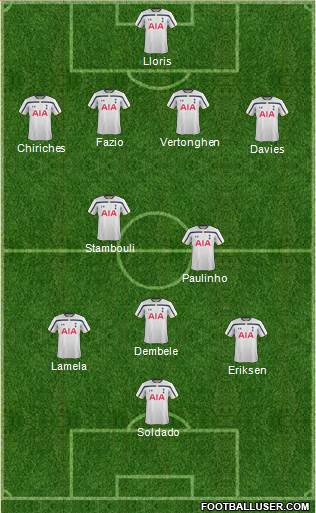